Its a grand feat for Ebony Life Tv Chairman, Mo Abudu as she is set to grace the 47th International Emmy Award Gala to hold on the 29th Of November, 2019.

[ads-post]
Mo Abudu, on Tuesday, was uncovered as the President on the social media handle of Emmy Awards.

In a subtle disclosure;

“As producers, we are in a unique position to share fresh, authentic, and original stories with a global audience. 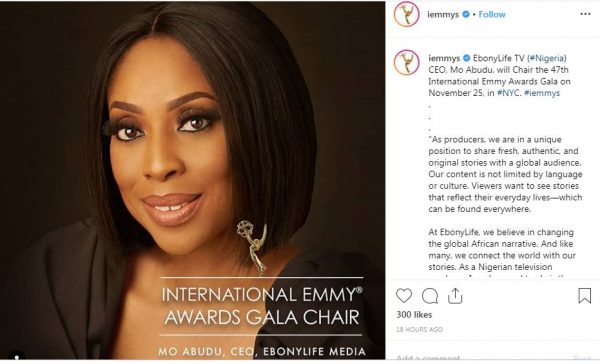 “Our content is not limited by language or culture. Viewers want to see stories that reflect their everyday lives—which can be found everywhere.

“At EbonyLife, we believe in changing the global African narrative. And like many, we connect the world with our stories.”

Tacha has bagged another endorsement deal and the reigning Queen from BBNaija Pepperdem season took to her Instagram page this...

Nigerian writer, Reality Joel is set to launch his debut novel, "THE CELEBRITY" on his birthday, the 4th Of November,...

Black Panther Hero; Chadwick Boseman is dead and has reportedly died after a four years battle with colon cancer. Chadwick...