Anthony Joshua Speaks: ‘I Was So Confident, I Didn’t Even Ask About a Rematch Clause’.

by Editorial
in Uncategorized
3 min read
0

Velicia Huston On growing up and growing older in Hollywood

‘Cobra Kai’ Season 2 is a Fun, Tragic Journey That Leaves You Wanting More

Anthony Joshua confirmed his intent to enforce an immediate return fight with Andy Ruiz Jr, admitting he was so confident in the run-up to his astounding defeat he had not bothered asking whether a rematch clause was in the contract.

The shock of Saturday’s extraordinary upset was still palpable inside Madison Square Garden when the former champion finally spoke early on Sunday morning after suffering four knockdowns in a one-sided defeat that cost him his the WBA, WBO and IBF heavyweight titles and his undefeated record. 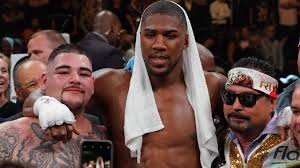 “It’s not expected,” the 2012 Olympic gold medallist said. “Bookies said I was a favourite. One shot on the top of the dome rattled me a bit and I tried to stay in there a few more rounds. But the better man won. Respect to Andy and I’ll move forward now.

“I didn’t even ask about a rematch clause because I was so confident I was going to win. If it’s there, we’ll go again and I’ll get the titles back. I’m going to beat him up. I’m not dwelling on it. You just correct it, you adjust, you sit down, you focus and you go again.”

The surprise result torpedoed a much-anticipated title unification fight between Joshua and Deontay Wilder, who has held the WBC’s version of the heavyweight championship since 2015. That fight was, until Saturday night, the biggest that could be made in the sport today, but instead becomes a slain golden goose representing a cautionary tale for the industry on the perils of letting superfights marinate too long.

But Joshua, positively upbeat given the circumstances, took a philosophical tack as he pondered his future. “Trust me, I come from a good family, but where I was at in life, I’ve dealt with more shit than this,” he said.

Eddie Hearn, Joshua’s long-time promoter, confirmed the contracted option for an immediate rematch with Ruiz and said it will take place in the UK in November or December, adding that it should take precedence over any mandatory title defences and “probably” be for all three belts that were on the line on Saturday night.

“AJ got sloppy,” Hearn said. “It was a beautiful combination in the third round. He was in total control of the fight but he got sloppy and never recovered. Listen, tonight was [Ruiz’s] night but AJ will come back 100% and we will make the rematch in the UK in November or December. But this night now belongs to Andy Ruiz.

“AJ has the heart of a lion and will come back stronger. Now at least we know the opponent for the end of the year in the UK. Absolutely we will enact the immediate rematch. He will be devastated when it sinks in. It makes the fall fight a must-win.”

Hearn acknowledged Joshua’s inexperience may have worked against him in his debut on American soil but refused to make excuses for his fighter.

“You know that 22 fights in he’s still learning the sport of boxing,” the promoter said. “He’s always been learning on the job. Unfortunately when you have to learn on the job, sometimes in the biggest of arenas, something can go wrong. And it’s brutal when it goes wrong.

“There’s no hiding place when you’re in there. There are no excuses. I’d love to be able to stand here now and tell you [Joshua had] a terrible camp or had these injuries but it’s not true. He won fair and square, Andy Ruiz.

“Tomorrow, the day after, the coming weeks, this is going to eat him up inside. Great fighters come back and improve. Some fighters never come back the same. The future will show how Anthony Joshua responds.”

Velicia Huston On growing up and growing older in Hollywood

Dropcap the popularization of the “ideal measure” has led to advice such as “Increase font size for large screens and...

‘Cobra Kai’ Season 2 is a Fun, Tragic Journey That Leaves You Wanting More

When we get out of the glass bottle of our ego and when we escape like the squirrels in the...

How Just Staring At Boobs Can Make You Live Long – Scientific Study Reveals.

How Just Staring At Boobs Can Make You Live Long - Scientific Study Reveals. A study done by a German...

“I Can Go To Jail For Chioma” – Davido Says, Further Discloses How He Spent N17 Million Shopping For Chioma.

"I Can Go To Jail For Chioma" - Davido Says, Further Discloses How He Spent N17 Million Shopping For Chioma....