Twelve Year Old Girl Locked Up And Starved By Her Guardians.

A married former British soldier, David Reed has been arrested and detained in Dubai on suspicion of brutal murder of an unidentified Nigerian Woman. 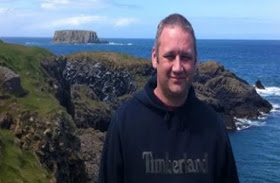 [ads-post]
According to reports, the lady died from several deep wounds as a result of repeated stabbing from the Man.

Reed, 46, has been held in jail for almost a month without charge after the woman suffered a fatal wound in a violent struggle, Mail Online reported.

The former army medic, from Bristol, has admitted he booked a massage with the Nigerian, who police described as an escort worker, euphemism for a prostitute.

The father-of-four has claimed that three men burst into the room where he was having the massage and attacked him.

He has told police that he acted in self-defence and the woman was fatally stabbed during a fierce struggle on August 4.

Investigators in Dubai believe he was the victim of a ‘shake-down’, with the gang demanding money or threatening to blackmail him.

‘It is common for prostitutes to work with other people to try and extort money from their clients because prostitution and sex outside marriage is illegal in the country,’ said a Dubai Police source.

‘From what we understand the suspect said he was acting in self-defence. The matter is still under investigation.’

Reed, who works in Iraq for the Group 4 security firm recruiting paramedics to work in hostile environments, told police he had booked a massage during a 12-hour stop over in Dubai.

He was staying in a hotel room, although Reed is understood to have visited an unlicensed massage parlour.

Reed is held on suspicion of murder and the offence of using the services of a prostitute.

The holding charge on the UAE court website reads: ‘Habitual practice of immorality or prostitution.’

Two other people who involved in the fight have also been arrested, it is claimed.

There is hope for nigeria and every nigerian as a bill seeking to impeach the president for thirty days without...

Tension was high on Thursday, May 14, 2021, at the Abattoir community, Jos South Local Government Area of Plateau State...

Twelve Year Old Girl Locked Up And Starved By Her Guardians.

The Police in Sokoto State has rescued a 12-year-old girl who has been identified as Joy Emmanuel. The young girl...

Baba Ijesha To Be Charged To Court, Risks Life Imprisonment.

Nollywood actor James Olanrewaju aka Baba Ijesha, will be tried for five offences. A statement by the Attorney-General and Commissioner...

Abusive Husband Stabs Mother-Inlaw To Death With A Knife.

A 28-year-old man, Opeyemi Adeola Ganiyu, has been arrested by men of Ogun state police command for allegedly killing his...